Of Steps, Knights and a Bespectacled Cow 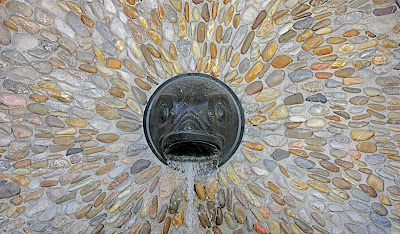 Bright sun, mild breezes, a creepy movie, St. Augustin's fire, great Slovakian musicians, and the same Hare Krishna guys I saw in the LA airport in 1968.  This week it is my turn to write, and as we've just rambled around the past few days, I'll do the same in this blog.
I'll start with the Strudlhof Steps. In our various comings and goings, we use these steps a lot.  They take us from up where we are on Währingerstrasse down to the Lichtenstein Museum, the gym Keir and I use, the French office supply store and other places in lower District 9.  We've always admired them as impressive steps, with two distinctive fountains, working their way left and right up the hill.  The image at the top is one of the fountains.  The other is below.
Then we discovered, thanks to a book by Duncan J. D. Smith, our audio tour guide many blogs ago, that these steps are "a lovely example of Viennese Art Nouveau" and inspired highly-acclaimed Austrian writer Fran Karl Heimito von Doderer to write his novel, The Strudlhof Steps.  It brought him "sudden and lasting success" in 1951 and got him past the career difficulties he was having because of his time in the Nazi party, which he said he joined so he would be allowed to write.  He went to the Russian front and ended up in a prisoner of war camp in Norway.
The word on von Doderer is that he really wasn't much of a Nazi in spirit.  I can understand that as both of my grandfathers were in the Ku Klux Klan in Michigan.  One was stunningly racist (he once yelled at my mother because she was watching Louie Armstrong on TV), and the other, a gentle, sweet grandfather, joined because it was the only way he could get a job at the Fisher Body plant in Pontiac.  I don't think he ever went to a meeting.
So one has to be a little careful in judging such things … but only a little.

We walked by the Easter egg market, which is still going strong, but resisted the eggs.  They did have a great Easter Bunny sign up, and we'll include that as our nod to Easter.  That and a rather odd statue of an Atlas guy with a turned wrist, holding what appears to be an egg.  I'm sure there is a story, we just don't know what it is.

We resumed Duncan Smith's audio tour but only got to the site of the slaughter of the last of the Knights Templar in this part of Europe.  The Knights Templar were the elite fighting unit of the Crusades – the men who wore the white tunics with the red crosses on the front.  After the crusades, they existed in groups across Europe, but primarily in France.  They weren't subject to local rule and eventually the European nobility grew afraid of them and, in 1307 (on Friday the 13th) King Phillip IV of France ordered the remaining knights arrested.
In Vienna, the knights had an enclave that involved a warren of passageways.  They didn't like the notion of arrest and torture, so they battled those who came to get them.  The street where their enclave was located is now called "Blutgasse" because the narrow street flowed with blood that day.


Misti and I sat and had coffee on Blutgasse, and I looked down to where the fighting took place and tried to imagine the sight and sound of dozens of men, swords swinging, cutting each other apart on the cobblestones.
Around the corner is the small church of the Knights Templar, and it has an impressive array of shields on the wall -- and some rather grim images.
After the knights, we found ourselves at the big cathedral, Stephansdom, along with what seemed like a few million tourists.  We've had the city to ourselves a bit over the past few months of cold and wet, so it was surprising, interesting, and annoying to suddenly see the streets filled with people.

We circled Stephansdom in search of an "O5" that was etched into one of its stones by the small Austrian resistance during World War II.  The "O5" was significant, but as we didn't find it, I'll save that for later.  What we did find were lots of small images of death all around the cathedral that were similar to those in the Knights Templar church.

Duncan Smith led us to one other odd treasure.  As seen here, it is a wall painting in the middle of District One of a bespectacled cow playing backgammon with a wolf.  It is an old painting that, according to Smith, apparently represents tension between Protestants and Catholics.  Which animal represents which religion we'll leave to you.

One of the benefits of tourist season is the return of the fascinating array of street entertainment.  As we left Stephansdom, we came upon a group of Slovakian musicians who were very good.  An oversized hammer dulcimer, violin, bass, viola … all played with abandon.  And they could sing.
As they reached the emotional peak of a particularly intense and fast piece, there suddenly was an out-of-place rhythm, punctuated by bells.

We turned to see the Hare Krishnas moving toward us along the Graben.  Same off- orange clothes, same song, and I swear, the same people I saw moving through LAX in my youth.  I wondered where they've been.  They moved as quickly as they used to, so soon the crowed refocused on the musicians.  We've seen the Slovakian musicians  before and next time I'll buy their CD and maybe include an audio file.
We then danced over to Vienna's Film Museum, where we met Keir and watched a screening, in English with German subtitles, of the 1997 film "Affliction" with Nick Nolte, Sissy Spacek and James Coburn.  Bleak. We walked toward home contemplating a son killing and burning his father.
And at that point, we came into the plaza in front of St. Augustin, a 14th century church that served the Habsburg dynasty.  Priests in vestments surrounded a small open fire in the plaza.  They prayed, lit a giant candle from the fire, then led a group of worshipers into the church for what I think was going to be a candlelight service.
This morning Misti and I went to the Easter service there.  It is an intriquing church because it is part of a larger palace and you really can't tell it is there.  You go through an entryway and suddenly you are inside an enormous cathedral.
It was packed, and the huge volume of St. Augustin was hazy with incense.  A full choir sang and a wonderful orchestra played.  The program didn't identify them.  What struck me was that despite it being Easter, there was nothing about the congregation that marked this day as special. While some men wore coats and ties, there was very little in the way of dressing up.  No Easter hats, fancy dresses, or men in suits … they apparently don't do that here.  Indeed, the tourists who entered the back of the church during the service were only a little under dressed.


After visiting the church this morning we sat in the sun, Misti with a mélange and me with a cappuccino mit schlagobers.  We shared an apfel strudel and watched the fiakers pass by with their passengers, and observed tourists from all over the world check maps and snap photos of each other in front of complicated statuary.
Must be Spring.
Posted by Misti and Jim at 4/25/2011 12:57:00 AM